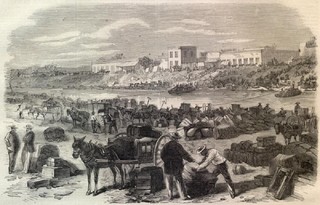 Cotton arrived at Brownsville from across the Confederacy, was transported across the Rio Grande to Matamoros, where steamboats conveyed it downsteam to the international (and neutral) boomtown of Bagdad at the confluence of the Rio Grande and the Gulf of Mexico, to be shipped to England and the rest of the world. 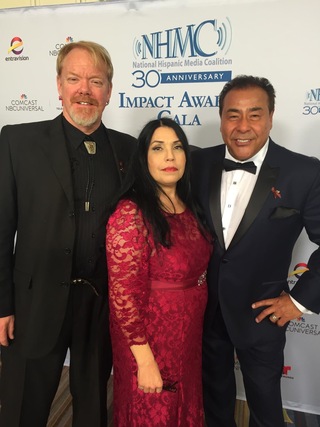 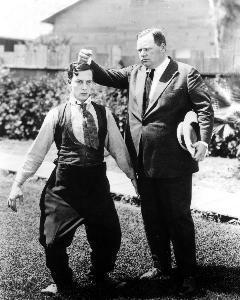 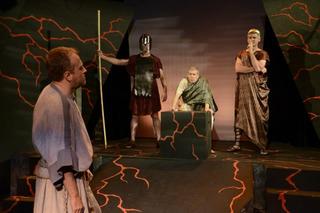 Euripides faces an inquistion in THE ROCK OF ABANDON (photo: Joel Daavid) 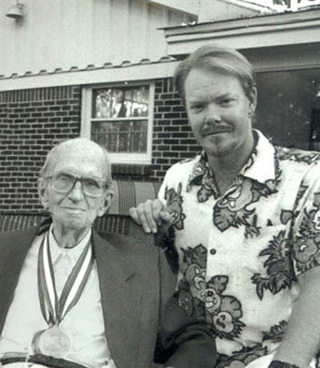 News from July of last year that I hope will be fresh news a year from now!

Back in July of 2019, I was blessed to have Viola Davis's husband Julius Tennon, do a rehearsed reading of my one-man play Frederick Douglass—Unexpected at he renowned Robey Theatre, directed by Robey Artistic Director Ben Guilory. We had about 50 people, most of them black, and the feedback after wards was good. Hoping that Julius's schedule running JuVee Productions allows him to do a full production in early 2021.

Just completed a draft of Rollout!, the true story of handball coach TONY HUANTE, of Commerce, California. Trained in youth as a bullfighter in Juarez, Mexico, he quit the bullring to come to California, where he worked as a crane operator at Bethlehem Steel for 40 years. My script tells the story of how he came to start coaching at risk kids from East L.A. and Commerce in the grueling sport of handball, eventually coaching the national pro champ.

May decide to self-publish GRANT'S HORSES this year. Writing on BLOOD BROTHERS, the Civil War sequel to GH. Focusing now on my main character's sojourn to Bagdad, Mexico in 1861. The boomtown at the mouth of the Rio Grande became the main point of export for Confederate cotton once the U.S.A. blockaded Confederate ports.

Meanwhile, had the first 15 pages of my play A REVOLUTION OF WOMEN read at Fierce Backbone Theatre Company's Monday night workshop. The play concerns the campaign by Women's Rights pioneers Elizabeth Cady Stanton and Susan B. Anthony to secure the release of Hester Vaughan, an English immigrant convicted of murdering her newborn.

Last but not least, March 28th will mark the one year anniversary of my blood marrow transplant.

Have begun writing my Civil War novel, which somehow seems more pertinent now than several years ago when I conceived it. Working title is THE DAGUERREAN.

Am looking for an agent for my novel GRANT'S HORSES, which takes place in Corpus Christi, Texas 1845-46, right before the war with Mexico.

Meanwhile...Great news! My leukemia is in remission, meaning that we're moving ahead with the goal of me getting a marrow transplant, probably mid- to late March. The marrow transplant has to happen in order for me to completely wipe out the cancer. I'm continuing with chemotherapy (month number 6!). I feel fine and am doing great--in fact, am 7 pounds heavier than when I was diagnosed with AML. I've been eating well and hitting the elliptical almost daily.

Thank you to all my wonderful family, friends, friends of friends, and well-wishers for your support, encouragement and prayers. It all helps and your love is very humbling. Again, thank you.

My lovely and talented wife Consuelo Flores scored another success with her play "The Legacy of the San Patricios," It was selected for the Frida Kahlo Theatre's 10-minute play festival and ran three weekends in January. Starring Crystal Flores and Nathan Clark, the story is loosely based on how Consuelo and I finally got together.

We had good crowds at the Complex to see Smokey rock it in FREDERICK DOUGLASS—UNEXPECTED.

A workshop production developed in the Fierce Backbone lab.

ALLOW TIME TO FIND STREET PARKING IN THE NEIGHBORHOOD.

Produced by Consuelo Flores & Stephen Blackburn **This production is made possible in part by a grant from The Los Angeles County Arts Commission.** (Artwork by Armando Norte)

Just a brief note for today. have been meeting when possible with the irascible and inimitable DANNY MORA, who's mentoring me on my screenplay ROLLOUT! It's inspired by the true story of Tony Huante, an amazing man who for 20 years coached kids from the barrios of East L.A. and City of Commerce, producing several pro national champs, but more importantly, keeping lots of kids out of gangs and in school. Hope to have a new draft of the feature script by September.

Danny's an amazing man himself, with a long career in the entertainment world as a nationally touring standup comedian who back in the day worked the same stage as the just-starting-out Jay Leno and Robin Williams; as a screenwriter (LAVERNE & SHIRLEY, among others); and as an actor (most recently seen in MCFARLAND, USA, opposite Kevin Costner). He coaches lots of actors as well, and counsels various other writers and artists, such as LA CUCARACHA creator Lalo Alcaraz.

Meanwhile, I have been working hard on expanding the 20-minute Douglass piece to a full-length one-man play titled FREDERICK DOUGLASS—UNEXPECTED. We did a stage reading of the piece at the Flight Theatre in the Complex in Hollywood at the end of May to an invitation-only audience of industry people whose feedback we trust. Rif Hutton starring as Douglass, David Wendell Boykins directed, and Consuelo Flores (my wife) produced. That version ran 97 minutes. The current draft runs 85.

Here's just some of what packed-house audiences had to say about LINCOLN ADJACENT:
• "WOW! With a stellar cast, amazing writing, and smooth flow, Lincoln adjacent is a supreme pleasure to watch."
• "A riveting play with breathtaking performances ...A powerhouse of stunning writing by Roger Q. Mason and Stephen Blackburn."
• "Powerful and compelling interconnected stories with a stunning cast."
• "These are personal stories, heart-wrenching in their honesty and in the hands of such capable actors."
• "Thoughtful and insightful writing comes alive with a stellar compelling cast."
• "A terrific theatre outing."

LINCOLN ADJACENT won a Hollywood Fringe Festival ENCORE PRODUCERS AWARD and was extended for two performances in July. My 20-minute, one-man play about Frederick Douglass, was one of three short plays comprising LINCOLN ADJACENT, a production by Onion Creek at this year's Hollywood Fringe Festival. My wife Consuelo Flores co-produced with Roger Q. Mason, who authored the other two short plays.

Frederick Douglass escaped slavery, educated himself and became a riveting political agitator, one of the great men of the 19th century. An advisor and gadfly to Lincoln, Douglass’ manners and eruditeness helped convince Lincoln of the humanity of African Americans. Douglass prodded and convinced Lincoln to let black men fight in the Union Army to win on the field of battle freedom for all African Americans. Without the legions of black soldiers, the Union might very well have lost the war, or at least made peace with the Confederacy without ending slavery. Without Douglass, there probably wouldn’t be any movies about Lincoln. My contribution to LINCOLN ADJACENT takes place decades after Lincoln’s death, when Douglass in his twilight years remained a respected, yet still controversial figure, even among African Americans. 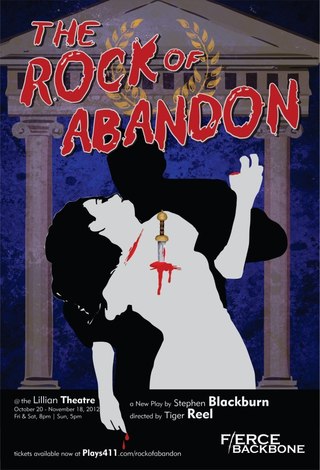 Fierce Backbone Theatre Company produced THE ROCK OF ABANDON on a frayed shoestring at the 99-seat Lillian Theatre in October-November of 2012.

The production looked great, with well-paced direction by Tiger Reel, strong acting by the enthusiastic and diverse cast, and we garnered great reviews.

When blacklisted dramatist Euripides (Jim Hanna) turns sleuth in order to avenge the murder of a courtesan who jilted him years ago, his investigation unmasks blackmail and treason, putting him on a collision course with the powers-that-be, including the charismatic, rapist general Alkibiades, who has beguiled Athens into launching an unnecessary war.


"This masterpiece delivers twists and turns worthy of Hitchcock himself." —Examiner.com 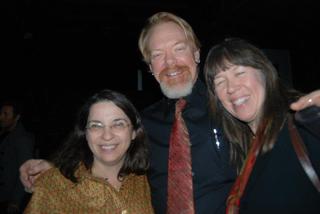 Costume ladies of the gods Antoinette Muto (l) and Kim Little (r). They created for us the wonderful period costumes. Their company, Muto-Little, based in Larchmont near Paramount Studios, has built the costumes for scores of movies, tv shows and Disneyland shows, and for stars including Michael Jackson, Beyonce, Rhianna, and more recently, for the Billboard Awards, Bruno Mars and Justin Bieber. Thanks Antoinette and Kim!

I'm now seeking another production, with a budget that will support the large cast and epic nature of the story.

An eloquent voice for Americans too often ignored or scapegoated. —Booklist Buy from Northwestern University Press

From interviews and collaboration with noted national homeless organizer and activist, the late Ron Casanova, Blackburn wrote Each One Teach One: Up and Out of Poverty — Memoirs of a Street Activist (Curbstone Press, 1996), which Kirkus Reviews lauded as “A valuable firsthand account of a street survivor’s harrowing experiences.” The book is now available through Northwestern University Press.

On January 15, 2002, Blackburn was the featured author of PEN International's winter lecture series in San Miguel de Allende, Mexico. He read from his book The Extinction of Rhinos in Mexico: 9 Tales of Life and Death (Xlibris, 2001).

In October and November of 2012, Fierce Backbone Theatre Company in Hollywood produced his play THE ROCK OF ABANDON, a noir murder mystery featuring the notorious playwright Euripides as the detective.

Blackburn lives in Los Angeles with his wife Consuelo Flores, who has an MFA in Creative Nonfiction from Antioch University.

Excerpt from The Extinction of Rhinos in Mexico: 9 Tales of Life and Death
“One of the best collections of Southwestern short stories I’ve ever read.”
—Michael Scott Myers, screenwriter of
The Whole Wide World, starring Vincent D'Onofrio and Renee Zellweger.

Each One Teach One; Up and Out of Poverty: Memoirs of a Street Activist
“An eloquent voice for Americans too often ignored or scapegoated."
- Booklist